Rose: The No. 1 Symbol of Love In Human History

Symbol of Love In Human History

Rose is one of the oldest type of flowers that human hybridized. It has ben hybridize since Roman times which also making roses the largest families of flowering plants with about 3400 species. Among these 3400 species, not to surprise that there are fruits that we are familiar with is related to rose, like apple, berries, peaches, plums, cherries and more. However, planting a rose are often not for the purpose of getting the fruit. Rose hold the human imagination and value as symbol of love and beauty.

As discussed earlier, there are about 3400 species of roses. For easier reference and study, they can be divided into 3 main groups.

As the name suggests, it is wild. Which also means it is occurs naturally with no help from man – a true wildflower. There are more than 100 of these worldwide, mainly native to North America, Orient and Europe. One thing in common, these true wild roses are all single flowered (most of the modern roses are double flowered) with 5 petals.

Old garden roses are offspring of the hybrid perpetual. The old garden rose also defined as rose that existed or human hybridized before 1867. But why 1867? This is because the first Modern Rose – La France, came into existence in 1867. It is the first hybrid tea rose and about 80% of all roses grown nowadays are modern classes of this rose.

Old Garden Roses that Bloomed once A Year

There are 5 individual classes, Gallica, Alba, Damask, Centifolia, and Moss. While Gallica is the oldest roses, which grown by the Greeks and Romans and bred by the Dutch and French eventually.

The first modern rose is La-France in 1867. The groups are Hybrid Tea, Pernetiana, Polyantha, Floribunda, Grandiflora, Miniature, Climbing and Rambling, Shrub Roses, English/David Austin, Canadian Hardy, Landscape (Ground Cover), Patio Roses. It is also the most common roses that we can see from any of our flower market nowadays.

Colors and Meaning of Roses

With the long history of rose hybridization, nowadays, we are never short of different colors of rose. While roses are generally symbol of love and beauty, there are different meaning behind every color of rose. 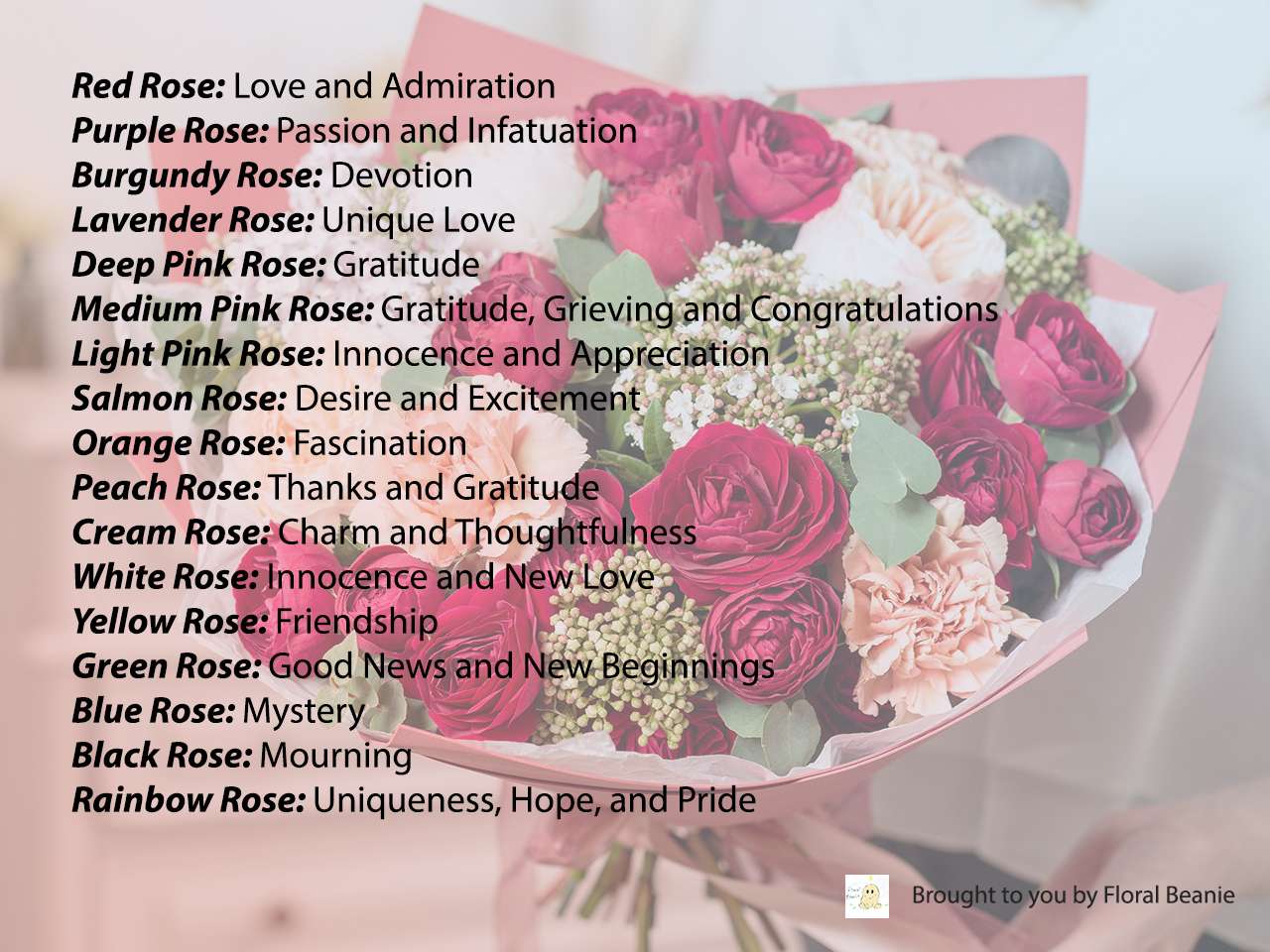 Number and Meaning of Roses

Sometime, meaning behind the color of roses are just not enough to descript your message. Hence is a list of hidden messages behind the number of roses in a bunch or rose bouquet:

Romantic Rose Conclusion: Love can be at every moment of life, and it will never die!

As the long history of rose a classic symbol of love for human. It is proven that, love are all around the world and it never die. It evolve from time to time just like the species of roses, from wild to old garden then to modern. It become stronger, better, more fragrance and spread to the entire world. Rose can be romantic but not limited to love between couple. It symbol the love of human. Therefore rose is suitable to be used for anniversary bouquet, birthday bouquet, graduation bouquet, thank you bouquet, wedding bouquet